The twin-screw extruder can be viewed from whether it i […]

The twin-screw extruder can be viewed from whether it is engaged or not, whether the direction of rotation is the same or different, whether the screw axis is parallel or not, whether the twin screw axis is parallel or not:
(1) Intermeshing co-rotating twin screw extruder:
Because the speed of the co-rotating twin screws at the meshing point is opposite, one screw must pull the material into the meshing gap, while the other screw pushes the material out of the gap. As a result, the material is transferred from one screw to another. Travel in the shape of "∞". Because the gap in the meshing zone is very small, the speed of the thread and the screw groove at the meshing point are opposite, so it has a high shear speed and a good self-cleaning effect, that is, it can scrape off any accumulated material adhering to the screw. The residence time of the material is very short, so the intermeshing co-rotating twin-screw extruder is mainly used for mixing and pelletizing.
(2) Intermeshing type counter-rotating twin screw extruder
In the intermeshing counter-rotating twin-screw extruder, the two screws are symmetrical. Because the direction of rotation is different, the spiral path of the material on one screw is blocked by the spiral edge of the other screw, which cannot form the "∞" shape. movement. In the solid conveying part, the material is transported forward in the shape of a closed "C"-shaped chamber. However, in the plan, a certain amount of space is left between the outer diameter of one screw and the root diameter of the other screw so that the material can pass through. When the material passes through the radial gap between the two screws, it is subjected to intense shearing, stirring and rolling, so the material is plasticized better. At the same time, it obtains the compression ratio by gradually reducing the pitch, which is mostly used for processing products.

(3) Non-intermeshing counter-rotating twin-screw extruder: less use than intermeshing type, its operating mechanism is different from intermeshing type, but similar to single-screw extruder, that is, materials are transported by conflict and viscous drag. In addition to moving the material in the direction of the machine head, there are many ways to move the material, as shown in the figure: Because the two screws are not meshed, the radial gap between them is large, and there is a large leakage 1; because of the relative spiral edges of the two screws The orientation is staggered, that is, the material pressure on the thrust surface of one screw is greater than the material pressure on the drag surface of the other screw, and then activity 2 occurs, that is, the material moves from the screw thrust with higher pressure to the drag surface of the other screw; The material that rotates with the screw is blocked at A, and activity 3 and other methods of activity occur, so it must be used in mixing, exhaust, and devolatilization.
(4) Comparing the conical twin-screw extruder with the parallel meshing counter-rotating twin-screw extruder, the volume of a series of C-shaped chambers composed of two screws and barrels gradually decreases from the feeding section to the discharging section. The feeding section can participate in larger powdery materials, and as the screw becomes smaller, the materials are compressed and melted. In the discharging section, due to the small diameter of the screw and the small circumferential speed of the screw, the shear rate that the material receives here is low, and the conflict heat is small. It is suitable for processing heat-sensitive materials, so most of them are used for processing PVC powder. Directly processed into products.
Introduction of thread curve correction method
According to the theory, the theoretical axial curve of the screw thread can be obtained, but the meshing gap value of the theoretical curve is 0. The four types of screw meshing gaps have been introduced above. In practice, the meshing gap curve is obtained after certain corrections to the theoretical curve: Intent: Several more uniform meshing gaps are formed. The gap is too large: the leakage flow is large, and the output value is reduced. If it is too small, it will cause dry conflict and reduce the life span; the gap is uniform (equal gap), and the screw work balance and self-finishing function are good. Correction method of screw meshing curve (three methods, all in use).

(1) Simple radial gap assurance correction method:
Principle: if the planning center distance is set as Cl, the CL should be appropriately reduced to leave the radial gap δ r during the calculation and drawing, and then the thread section should be generated according to the calculation, but the final installation is still based on the original theoretical center distance. That is: CL '= Cl - δ R is used for generating curve, and Cl is used for Zhoushan screw.
(2) Radial and axial meshing clearance correction:
Principle: take the point on curve 1 (dotted line) of the theoretical spiral curve (in the axial section) as the center, and move the two ends along the axis respectively (translation), such as the left point a is translated to point a ', to get the curve 2 (dotted line) in the figure, and then translate all points on Curve 2 along the radial direction, such as the point a' is translated to point a ", to get the practical curve 3 (solid line). Features: with proper axial translation adjustment, the gap between axial and radial direction can be achieved, but the normal meshing gap of thread is not equal.
(3) Correction of normal equal gap of normal thread surface (geometry of space surface)
Key point: Normal Equation Derivation calculation machine programming calculation axial correction and radial adjustment matching principle: it is necessary to get the thread normal meshing curve (three-dimensional equation). The Equation Derivation will use spherical geometry knowledge, and the coordinate values of the equation will change with the screw rotation. According to the method (2), each point of the normal meshing curve equation can be translated along the axial and radial direction (the key is to adjust the axial translation), and then the normal thread meshing equal gap (output of the accounting machine) can be obtained. This correction method is now recognized as the most reasonable meshing curve correction method.
7. Basic principle of screw element placement:
1. Melting section: toothed plate and kneading plate can be used to speed up the melting and mixing of materials. In practice, forward conveying elements are generally used to separate the mixing elements. In order to prevent large temperature gradient in the melting zone;
2. Mixing section: dispersion mixing: select narrow piece, small stagger angle component, lax mixing: select wide piece, large stagger angle component, left-hand delivery kneading plate or multi tooth toothed plate
3. Exhaust section: in front of the exhaust port, reverse thread elements are generally set to block the melt, so that the material can overflow the screw groove. As for the extruder used for devolatilization, it is necessary to set up multiple exhaust ports, so the reverse kneading plate and reverse screw element can be used instead;
4. Melt conveying section: the toothed disc element can be selected to improve the homogenization quality of melt, and the small pitch threaded element can be used together to strengthen the forward conveying ability. 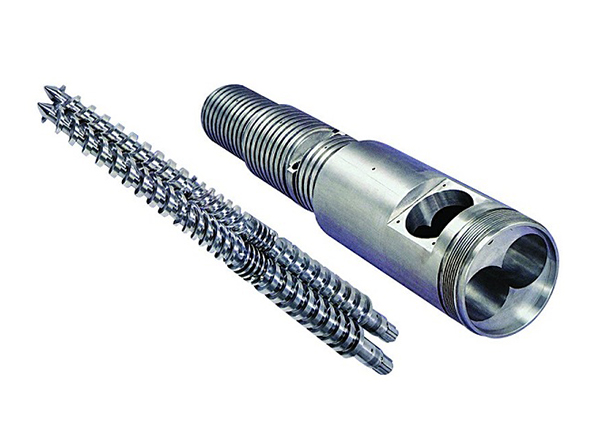