Home / News / Talking about each part of the injection molding machine

Talking about each part of the injection molding machine

4. Nozzle
The nozzle is the transition part connecting the barrel and the mold. When injecting, the melt in the barrel is pushed by the screw to inject the mold with high pressure and rapid flow through the nozzle. Therefore, the structure and form of the nozzle, the size of the nozzle, and the manufacturing accuracy will affect the pressure and temperature loss of the melt, the range, the pros and cons of the feeding effect, and whether the phenomenon of "salivation" occurs. There are many types of nozzles currently in use, and they all have their scope of application. Only the three most used are discussed here.
(1) Straight-through nozzle This nozzle has a short tube shape. When the melt flows through this nozzle, the pressure and heat loss are very small, and it is not easy to produce stagnation and decomposition, so the outside of it is generally not attached with a heating device. However, due to the short nozzle body, the length that can be extended into the hole of the fixed template is limited, so the main runner of the mold used is long. In order to compensate for this defect, the length of the nozzle is increased, which becomes an improved type of the straight-through nozzle, also known as the extended nozzle. This nozzle must be equipped with a heating setting. In order to filter out solid impurities in the molten material, a filter screen can also be installed in the nozzle. The above two nozzles are suitable for processing high-viscosity plastics, and salivation will occur when processing low-viscosity plastics.
(2) Self-locking nozzle During the injection process, in order to avoid the salivation or retraction of the melt, it is necessary to temporarily block the nozzle channel and adopt the self-locking nozzle. Among the self-locking nozzles, the spring type and the needle valve type are the most widely used. This type of nozzle relies on the spring to press the valve core in the nozzle to achieve self-locking. When injecting, the valve core is pushed open by the high pressure of the melt, and the melt is injected into the mold. When melting glue, the valve core is reset and self-locked under the action of spring. Its advantage is that it can effectively prevent the "salivation" phenomenon when injecting low-viscosity plastics, is convenient to use, and has a significant self-locking effect. However, the structure is very complicated, the injection pressure loss is large, the shooting range is short, the feeding effect is small, and the requirements for the spring are high.
The lever needle valve nozzle is the same as the self-locking nozzle. It is also a kind of temporary opening and closing of the nozzle channel during the injection process. It uses an external hydraulic system to control the opening and closing valve of the linkage mechanism through a lever. Core. When in use, the operated hydraulic system can open the valve core accurately and timely according to the needs, and has the advantages of convenient use, reliable self-locking, low pressure loss, accurate measurement, etc. In addition, it does not use a spring, so there is no need to replace the spring. The main disadvantage is that the structure is more complicated and the cost is higher.
During    injection, the plastic melt is pushed by the screw and flows through the nozzle at a very high shear speed into the cavity. Under this high-speed shear, the melt temperature rises rapidly. Especially for high viscosity PVC, PP-R, PMMA, PC, high impact ABS, etc., too small nozzle hole diameter will cause high temperature decomposition of plastic. For thin-walled precision products that are difficult to fill, a nozzle with a longer range should be used, and for thick-walled products, a nozzle with a good plasticizing effect is required. In addition, for some plastics with very low melt viscosity (such as PA, etc.), a self-locking nozzle with anti-salivation function is required.
In many machines, in addition to general-purpose nozzles for general viscosity, there are also special nozzles such as self-locking nozzles, PVC nozzles, PMMA nozzles and so on. If necessary, they can also provide longer range for thin-walled nozzles. Dedicated nozzle for products.
5. Flange
Flange is the part that connects the nozzle and the barrel? It only serves as a channel in the plastic injection process. If there is a large gap or groove on the joint surface of the flange and the nozzle or the flange and the barrel, the black spots of the product will appear due to the decomposition of the plastic in the gap or groove for too long.
6. ​​Feeding hopper
The feeding hopper is a part that stores plastic raw materials, and some add heating and blowing devices to the feeding hopper to make a drying hopper. The shape of the hopper is generally a lower cone shape and an upper cylindrical shape. The cone-shaped cone slope has different optimal values ​​for plastic parts with different particle sizes, different particle shapes, and different friction coefficients and adhesion coefficients between particles. Otherwise, the storage capacity of the hopper is wasted or the feeding is not smooth. Or the phenomenon of "bridging" or "funneling into tubes" where the material is not discharged at all.
The reason for the "bridging" sign is that the plastic particles form an open bridge between the small cones that can support the material above it. It is easier to produce larger particles and irregular shapes of recycled materials. "Funnel into tube" is because the lower particles are not enough to pull the adjacent particles to move together, which is often produced when the plastic particle size is small. The general solution is to install a vibration assembly on the hopper or reduce the cone slope. If the heat on the barrel is reported to the hopper to make the temperature of the hopper too high, the plastic particles will harden or stick into blocks, which is more likely to form "bridging" or obstruction. 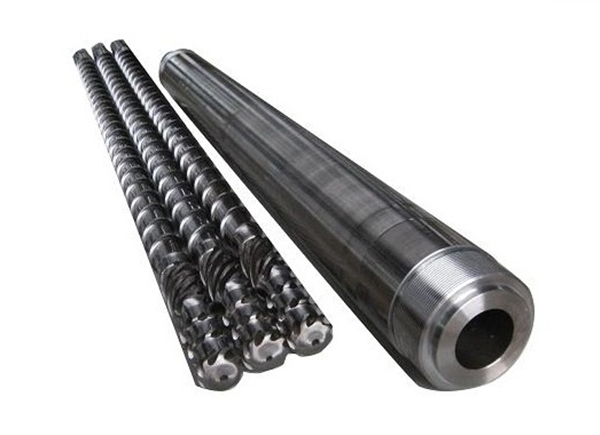 PREV: New anti wear maintenance method of screw      NEXT: Ways to protect the screw and barrel